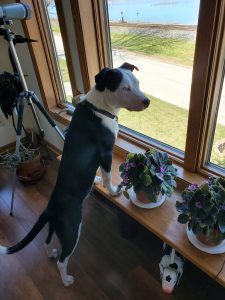 Hi! Milo again. It was quite a second day. I had a good night sleep “not on the bed”. Bill served a Beneful breakfast. Then he left to Winona to buy me some new goodies. I need a harness and a lead and a tie out line, plus some treats. He got some treats Sunday but they only last about 2 minutes. The new ones last longer, but one was gone in 15 minutes. The second one Bill put on the counter for later but I stood up and drug it off anyway. (Hope he doesn’t learn!) It lasted about 45 minutes. I wonder what he will come up with tomorrow? We had 2 good walks, one out on the old railroad point without a leash! OH the smells on that path!! I did not want to stop. Then later some men came and cut off the top of the tree. I had a prime view in the big front window. Then someone came with small tractors and kind of raked the lawn. What fun to watch. After that Bill took me outside and let me play with my walnut. I love throwing it over my head and rolling down the hill to grab it and then chew on it, then do it all over again. I spent 1/2 an hour doing that. Then I chewed it in half and Bill made me quit. Poop. I’ll find another one tomorrow.